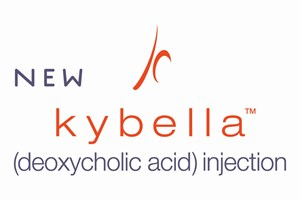 Kybella™ is a new injectable treatment for submental fullness (double chin) that can significantly improve chin contouring without the invasiveness and downtime of surgical options. Kybella was approved by the U.S. Food and Drug Administration (FDA) in May 2015 for the reduction of submental fat. Union Square Laser Dermatology was one of the first centers in the U.S. to offer this treatment, starting in late June 2015. Dr. Chapas has been working with Kythera Biopharmaceuticals, Kybella’s developer, to train U.S. physicians in the use of Kybella.

How does it work?

Kybella is a synthetic formulation of deoxycholic acid, which is a substance naturally synthesized by our body and used to break down and absorb dietary fat. Kybella has been under development for more than 9 years, and has been the subject of over 20 clinical studies involving more than 2600 patients. When properly injected in the chin area, it has been shown to dissolve submental fat (which causes double chin) and result in significant cosmetic improvement by creating a more streamline contour along the jawline.

What causes submental fat (double chin)? Who is affected?

The major factors seem to be genetics, natural aging or weight gain. Double chin can cause an older and heavier look and according to a 2014 survey by the American Society for Dermatologic Surgery approximately 70% of consumers report being bothered by submental fullness.

What other options exist to reduce submental fat?

The only effective options to treat submental fat before Kybella were surgery or liposuction.

When is Union Square Laser Dermatology going to offer Kybella?

Kybella was approved by the FDA in May 2015. Dr. Chapas is participating in Kybella’s training program to train physicians nationwide during the summer of 2015 (starting with our own physicians at USLD). We have been offering Kybella to our patients since late June 2015. If you are interested in Kybella, please schedule a cosmetic consultation with one of our physicians.

Are the results permanent?

This is a recent treatment, so we don’t know for sure, but so far results appear to be permanent if there is no change in lifestyle factors.

What if there is subsequent weight gain?

Patients in the clinical studies who experienced weight gain after their treatment did not see return of their submental fulness. However we will have a better understanding about the impact of subsequent weight gain in the future, when data becomes available from a broader set of patients.

How many treatments does it take?

Kybella is administered by injections into the fat under the chin through a series of treatments spaced no less than one month apart. The treatment plan is tailored to the desired outcome by the treating physician. The total number of treatments varies–typically in the range between 2 and 5. We expect that most patients will receive two treatments spaced 1-2 months apart, but your physician will determine the best regime during your consultation based on your physiology and goals.

How quickly do the results appear?

Typically results appear within weeks to months, and keep improving as additional treatments are administered.

What is the evidence it works?

Side effects were comparable to other cosmetic injections such as dermal fillers, leading the FDA Medical Advisory Committee to unanimously recommend approval 17 to 0 after reviewing the data. In very rare cases, injection outside fat deposits could damage skin tissue, or injection too close to a nerve could cause injury that affects the appearance of the mouth. While side effects resolved on their own within 1-2 months of treatment, to minimize risks it is recommended that Kybella should be injected by dermatologists and plastic surgeons trained on its use.

Kybella may not be appropriate for everyone. Patients that have had previous plastic surgery procedures on the neck, chin and jawline will need to be evaluated on an individual basis. Those who have difficulty swallowing, bleeding problems or medical conditions that might affect the face and neck may not be good candidates for Kybella.

If you're thinking about next steps, get in touch to schedule a consultation.

How can we help you?

Book an Appointment Ask a Question